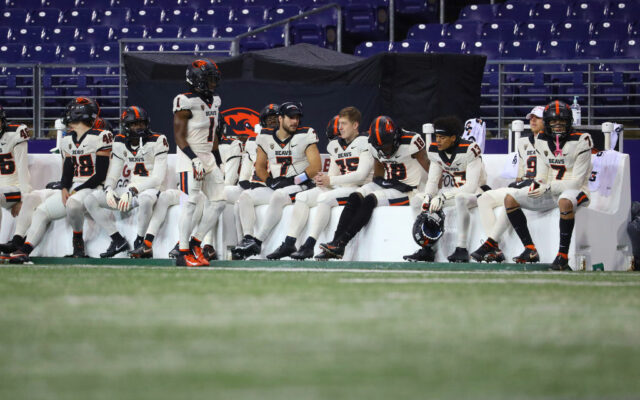 Oregon State had one of the wildest plays of the year, but that wasn’t enough to score a big win in Seattle.

The Beavs forced a punt on Washington’s first possession, and there aren’t enough words in the English language to describe the sequence of events that followed.

However, the Pac-12 Refs struck.

With the Beavs down 24-21 and driving towards a go-ahead touchdown, Oregon State was met with a third-and-1 at the Husky 5-yard line.

Jermar Jefferson ran the ball on third down, and the refs marked him short — even though he appeared to get the first down. So, he ran it again on fourth down, and Jefferson appeared to earn the necessary yardage again. The refs, again, said no.

Here’s some photo evidence that makes it look like the referees put the ball where Jefferson’s knee went down, not where the ball was when his knee hit the ground.

So here’s the OSU spot. Line to gain if the four. First pic is Jefferson falling btwn two Huskies. Second is the spot. pic.twitter.com/dXqb9qD4yT

Did this play totally cost Oregon State the win? No. Is it realistic to say it changed the complexion of the game? Yes.

The Beavs go from a chance to take a 28-24 lead to no points on the drive at all.

Could Oregon State have just kicked a field goal on fourth down? Sure. However, coach Jonathan Smith saw what we saw, a first down — or “near” first down — and he risked the kick attempt it to pick up the first down.

I’m not saying the Pac-12 or the refs had it out for the Beavs. However, I agree with our own John Canzano when he questioned what was happening in Seattle on Saturday.

Canzano found out there were only six cameras at Husky stadium for the game. No pylon cams. No yard-marker cameras. They didn’t even have the sky cam or a cart camera that usually would ride along the sidelines.

Did Oregon State still have time to comeback and win? Yes. But, if you don’t think this ruling didn’t change the mindset of play-calling and the mood of both teams, you weren’t paying attention.

Up next, Oregon State will host Cal in Corvallis as both teams each look to win their first game of 2020. Kickoff set for Saturday at 12:30 p.m. PST on FS1.