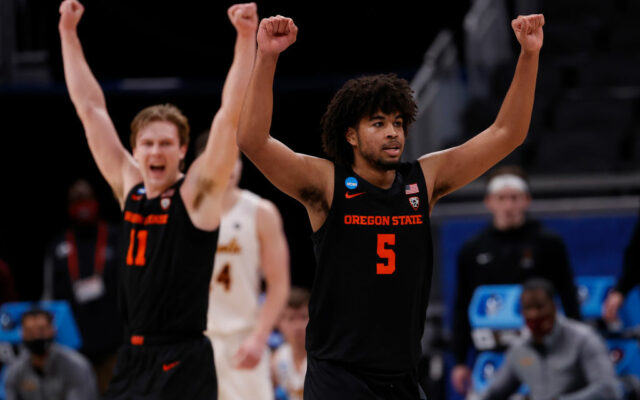 Oregon State started behind 7-1. They fought back time and time again. Now, they’re the second No. 12 seed to ever reach the Men’s NCAA Tournament Elite Eight.

Ethan Thompson carried the scoring load for the Beavs with 22 points, but he did a little bit of everything for OSU. He was an excellent ball handler, showed his great basketball IQ and kept the team flowing on offense and defense.

Warith Alatishe was the only other Oregon State player in double figures, finishing with a double-double 10 points and 10 boards. He also grabbed three huge offensive rebounds.

Jarod Lucas struggled from the floor — 3-of-9 overall, 2-of-6 from three — but he hit some big three pointers at the end to keep the Beavs afloat. He had eight points.

The unsung heroes for Oregon State was definitely the bench.

After not playing against Oklahoma State, Rodrigue Andela was big when it looked like Roman Silva couldn’t keep up with Krutwig early. Andela collected four points, five rebounds and two blocks.

Also off the bench, Maurice Calloo had six points. Then, Gianni Hunt didn’t score a lot (just two points) but he had four assists and three rebounds (two offensive).

Every player contributed something important to the Beavers win. Oregon State needed every point, rebound, assist, block, steal, etc. they could get.

The defense was incredible, from both teams, for most of the game. There was a small stretch where both teams were knocking down shots almost at will, but then the defense came back in full force.

The big turning point in the game was when Lucas Williamson left the game due to foul trouble. Oregon State scored 11 points, while Loyola only managed seven. The Beavs never gave the lead back.

Up next, OSU will face the winner of No. 2 Houston-No. 11 Syracuse.