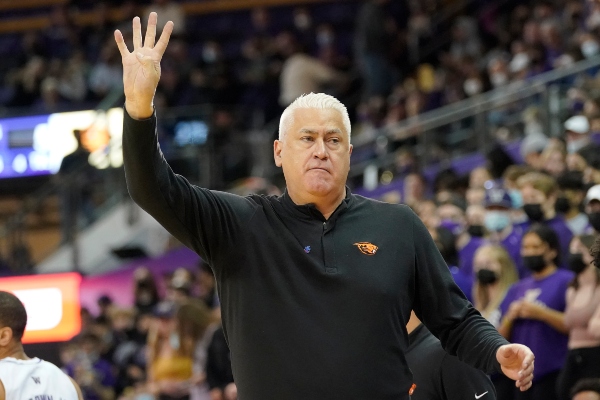 Oregon State head coach Wayne Tinkle and his staff announced Wednesday the addition of Thomas Ndong, who signed a National Letter of Intent to join the Beaver basketball program beginning with the 2023-24 season.

“Thomas is a very skilled and explosive athlete with a high basketball IQ,” Tinkle said. “He brings great versatility with his ability to guard and play multiple positions. Thomas comes from a great family and has grown by leaps and bounds under the leadership of the NBA Academy. We are thrilled to be adding him to our program, where he will be joining a great group of young players that we are very excited about.”

Ndong played for Canada in this summer’s FIBA U18 Americas Championship, competing alongside fellow Beaver KC Ibekwe. He posted a pair of double-digit scoring outings during the group phase, including a 12-point, seven-rebound performance against Argentina. Overall Ndong averaged 6.2 points and 5.6 rebounds per game in the event, helping Canada place third.

The forward is currently at the NBA Academy Latin America, an elite basketball training center in San Luis Potosí, Mexico, for the top high school-age prospects from throughout the Caribbean, Canada, Mexico, Central America and South America. During his time at the Academy, Ndong has competed at a number of international showcases and events, including exhibition games at the 2021 G League Winter Showcase.

He also took part in the 2022 NBA Academy Games, which pit top prospects from elite programs against each other. During that event, Ndong posted a 17-point, 11 rebound double-double to lead his team to victory over The Skill Factory National.

“I knew I wanted to be a part of a family atmosphere where I could become my best on and off the court,” Ndong said. “On my visit, Oregon State showed me how united they are and I immediately fell in love with the school.”