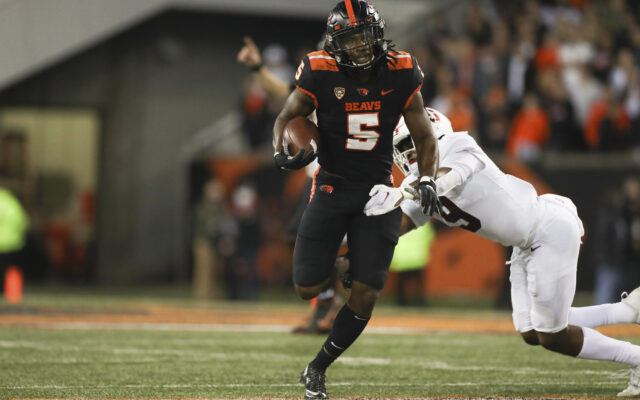 With the departure of last year’s starter B.J. Baylor, the backfield in Corvallis will belong primarily to Deshaun Fenwick this season.

Wednesday, the redshirt junior was named to the preseason watch list for the Doak Walker Award, given annually to the nation’s top college running back by the PwC SMU Athletic Forum.

Fenwick debuted with the Beavers last year after transferring in from South Carolina.  As the second back behind Baylor, Fenwick played in 12 games, totaling 448 yards on 78 attempts and 4 touchdowns, averaging 5.7 yards a carry.  He totaled 127 yards and 2 touchdowns in the Beavers tough road loss at Washington State on Oct. 9th.

Fenwick has career totals of 971 yards on 175 carries and six touchdowns across four seasons with South Carolina and Oregon State (’17 through ’21) heading into this fall.

A list of 10 semifinalists for the Doak Walker Award will be announced in November, with three finalists named later that month.

Oregon State opens the season Sept. 3rd hosting the Boise State Broncos at Reser Stadium.  The game will be televised on ESPN, kicking off at 7:30 p.m.