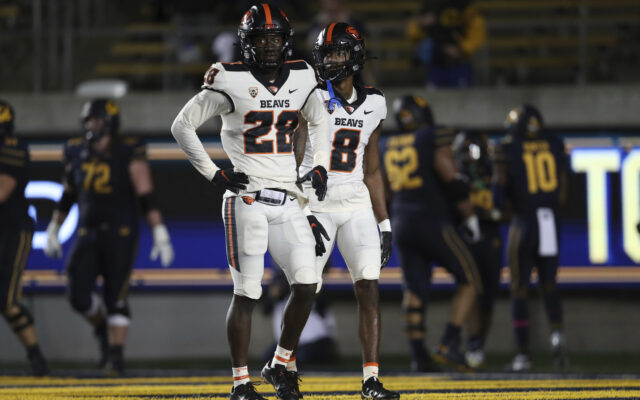 Oregon State entered their road match-up with Cal just one win shy of becoming bowl eligible for the first time since 2013. The Beavers were leading the Pac-12 in total offense, points per game, and rushing yards per game, but would be faced with a tough test against a stingy Cal defense that has been solid against the run all season despite their teams overall record.

From the opening possession of the game, Oregon State dug themselves into a whole and would play catch up the rest of the way. B.J. Baylor took the handoff on the first play of the game and fumbled it away to the Cal defense, setting the Bears offense with excellent field position.

Six plays later, Cal quarterback Chase Garbers ran it in from 2 yards out, and the Bears took an early 7-0 lead.

Cal would add a field goal to extend their lead to 10-0 in the first quarter, but the Beavers offense had a chance to cut into the lead as the quarter came to an end. Chance Nolan hit Luke Musgrave for a 28-yard gain that put Oregon State in striking distance at the Cal 14-yard line to begin the second quarter. The Bears defense stopped Oregon State on three straight plays to force an Everett Hayes 29-yard field goal.

The Bears offense marched down the field on the ensuing possession to extend their lead to 17-3, utilizing the ground game most of the way. The next possession for Oregon State possession would be critical as Chance Nolan drove the Beavers offense just outside of the red zone before getting intercepted on a 3rd & 9 from the Cal 34-yard line.

After the Beavers defense responded with a three-and-out, Chance Nolan and the offense had a chance to make up for the previous mistake just before halftime. Nolan found Trevon Bradford for an important 32-yard touchdown strike with 0:55 left on the clock. Beavers cut into the Cal lead to make it 17-10 at the break.

tell him when to go 😤

The two teams traded touchdowns in the third quarter before the Bears made a game-changing special teams play on the Beavers third possession of the second half. Cal’s Nick Alftin blocked Luke Loecher’s punt, setting the Bears up with great field position once again. One play later, Chase Garbers found Trevon Clark for the 38-yard score, and Cal took a commanding 31-17 lead into the fourth quarter.

Oregon State needed a scoring drive more than ever, as the hope of securing that all-important sixth win of the season started to feel further away by the minute. The Beavers offense found themselves stuck with a 3rd & 12 at the Cal 46-yard line, desperately needing a big play. Chance Nolan responded by finding Trevon Bradford for a 46-yard touchdown pass, Bradford’s second of the game.

Beavers converted a 2-point conversion and found themselves with life, down 31-25 with 11:23 remaining in the game.

Beavs are still in it. 😤
@trevon_bradford scores his second touchdown of the night for @BeaverFootball.

On the ensuing drive for Cal, the Bears offense was determined to crush any sense of hope on the Oregon State sideline. Chase Garbers led Cal on an 11-play 75-yard touchdown drive in which their offense converted 3 of 3 third down attempts, including a 3rd & goal from the Oregon State 2-yard-line. Garbers found Christopher Brooks for the dagger with 5:36 remaining. To make matters worse, Cal converted the 2-point conversion to make it a 39-25 ball game.

Chance Nolan was intercepted on the first play of the next Beavers’ possession. Cal was able to run out the rest of the clock, taking it down to the Oregon State 6-yard-line before being stopped on 4th & 6 with just 0:01 left on the lock.

Oregon State possessed the ball for a total of 3 minutes and 37 seconds in the fourth quarter, while the defense had absolutely no answer when they were needed the most.

With the loss, the Beavers drop to 5-3 (3-2) on the season and fall to 3rd place in the Pac-12 North due to their head-to-head loss at Washington State.