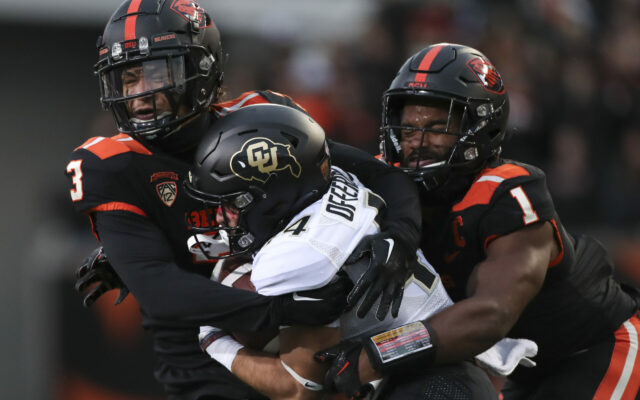 Colorado running back Charlie Offerdahl, center, is brought down by Oregon State defensive back Jaydon Grant (3) and linebacker Omar Speights (1) during the first half of an NCAA college football game on Saturday, Oct. 22, 2022, in Corvallis, Ore. (AP Photo/Amanda Loman)

Damien Martinez ran for a career-high 178 yards and three touchdowns, and Oregon State’s defense turned in another strong performance Saturday night in a 42-9 victory over Colorado. The Beavers (6-2, 3-2 Pac-12) have won three straight games and are bowl eligible for the second year in a row after ending a seven-year bowl hiatus last season.

Oregon State extended a 21-3 halftime lead to 28-3 on a 60-yard touchdown pass from Ben Gulbranson to tight end Jack Velling on the opening drive of the third quarter.

On Colorado’s first offensive play of the second half, J.T. Shrout’s pass intended for tight end Brady Russell was intercepted by cornerback Alex Austin and returned 42 yards for a touchdown. That play gave Oregon State a 35-3 lead.

The Beavers racked up 472 total yards, including 270 on the ground behind Martinez’s second straight 100 yard performance.

Up next, Oregon State visits Washington on November 4.