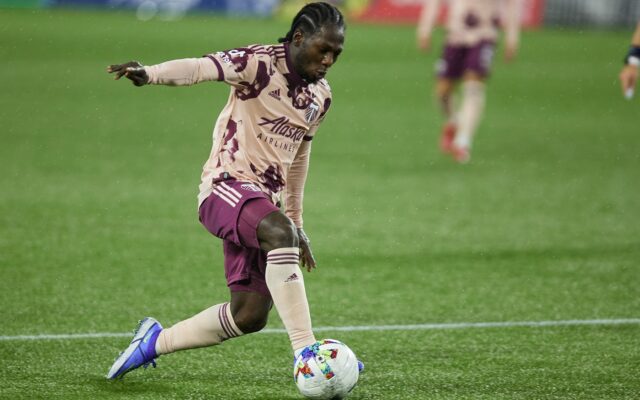 In their first road trip of the 2022 MLS season, the Portland Timbers settle for a last-minute 1-1 draw with LAFC at Banc of California Stadium on Sunday night.

While the second-half was primarily Portland soaking up LAFC pressure, the opening 45 was back-and-forth between the West Conference foes. Similar to last week versus New England, Yimmi Chara played hero yet again with a bicycle kick.

The wonderful strike in the 18th minute looped perfectly over Goalkeeper Maxime Crepeau. Portland had few chances for the remainder of the first half after going up 1-0, rather the men in green were a mainstay in the scorebook with yellow-card cautions.

At the half LAFC made a surprising substitution, taking out star-forward Carlos Vela presumably with the Mexican international dealing with an injury issue.

Even without Vela, LAFC dominated the ball, out-possessing the Timbers 70%-30% in large part to Defender Claudio Bravo being issued a second-yellow card 17-minutes into the second half.

The 10-man Timbers struggled to string together passes and their few opportunities had to come via counterattacks. Portland was outshot 25-10 but the Timbers defense frustrated the LAFC attack for the full 90.

Unfortunately, 90 regulation minutes was not enough for the clean-sheet as Mamadou Fall tapped in the equalizer three minutes into stoppage time. Given the entirety of the night, 10-man Portland grabbing a point is a success but being minutes away from victory will be difficult for the Timbers to swallow.

Portland is back at Providence Park next weekend to face Austin FC on Saturday at 7 PM.